A Change of Track

No. Nystrup Gravel is not about to change scale or gauge - or even worse go standard gauge. Recent test running of locomotives on the steel sleepered track on the factory module showed that the track laid down was a little under gauge. While narrow gauge is great, you can actually have too much 'narrowness'. A track gauge of 16.0 - 16.2 mm. is obviously too narrow to safely operate several of my locos. I also noted that my Magic Train steam loco bumped the bolts on the sleepers. I have consequently lifted my Coldicott-track.

Having mentioned my troubles on the NGRM-forum a good friend from the Netherlands came to the rescue with track panels of his own design. Just at few days later I had a generous number of 3D printed steel sleepers on Code 83 rail to install.

I laid the new track panels in the same way as I had laid the Coldicott panels. I inserted wooden sleepers under the rail ends and connected the rails by soldering them on brass plates. In real life the wooden sleepers would provide stability to the track. Current to the rails is supplied by wires soldered to the underside of the rails connecting to heavier wires under the base board.

I used up my remaining few Blitz resin French army sleepers in one end of the module. I hadn't many left and I thought it fun to include an other type of steel sleeper on the module.

I'll probably keep testing the track a little longer before I start to paint and weather rails and sleepers. New parts for the bakelite factory arrived last week and I have been planning how to equip it with lights and a partial interior.

Between other projects I recently finished a load for a lorry. Having used a number of Scale Link skips for either flat wagons or bogies I had some of the kits' resin skip bodies surplus to requirements.


To make some of them useful, I cleaned the bodies, glued them three on top of each other and gave them a spray with black primer. In each of the two stacks I painted one body dark grey to create a little variety. The skip bodies then received a wash with diluted oil paint 'burned umber'. The two stacks of skip bodies were mounted with glue on a simple frame of wooden profiles. EZ-line were used to represent the rope holding the bodies in place. The end brackets for the skip bodies were glued into a wooden crate. Any type of crate would do, but I picked one from an old Tamiya kit. I added only two pieces of thread for rope handles. The brackets would be mounted when assembling the skips after arrival.

Posted by Claus Nielsen at Friday, February 19, 2016 No comments:

Last March I started planning Bankes Bakelit, the small bakelite factory just north of Nystrup Gravel's 600 mm. track. The factory has now progressed from a card board mock up to a proper structure of foam board. I adjusted the size of the building slightly as there was room for a little larger foot print on the module. As I wasn't aiming for a scale model of the factory building, I just enlarged the building as much as space allowed while keeping the proportions. The building now makes a more prominent presence. I didn't want trains to dwarf the building - rather the opposite.
The building is made from a double layer of 6 mm. foam board. Window openings in the inner foam board layer are a little larger than in the outer layer. In that way I hope to fit windows in a realistic depth in the wall. I still haven't found any suitable window frames to fit in the holes and I suspect I will not. I will probably have to build the window frames from plastic profiles.
Interior floor and dividers have been built to allow for lighting and a little interior detailing. With floors the building don't need bracing.
Posted by Claus Nielsen at Friday, February 05, 2016 3 comments:


Running narrow gauge trains in full scale surely gives you a better sense of the practical workings of the prototype for your model railway. If you have a heritage railway in your vicinity consider volunteering and take part in the work there. You will no doubt be welcomed and you will ‘cash in’ on three ‘key performance indicators’: help run a real railway, pick up good ideas for your model railway and enjoy the good company of fellow railway men and women (probably mostly men…).
Posted by Claus Nielsen at Thursday, February 04, 2016 No comments:

Last summer I had endless trouble getting a kit bash of a lorry together. In the end I succeeded. I'm in a similar situation now with the MMK kit of a Bedford O. With vague or non-existent location points for the cab, front mud guards and bonnet I have decided to give the kit a break. Together with the instructions everything has been wrapped in tissue paper and stuffed in a card board box. I seldom pack a kit up like this once I have started, but this one had to go back on the shelf to mature. Hopefully things will go much better when we meet again! 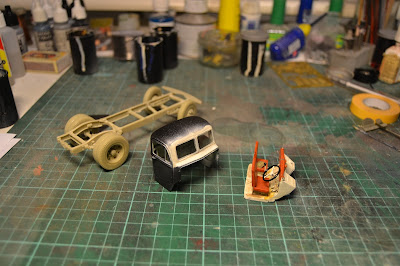 I have no shortage of other models to build. After a little clearing out and book managing I'll be getting on with track laying on a module.

Posted by Claus Nielsen at Monday, February 01, 2016 No comments: