Time flies and suddenly locos need maintenance - even without having seen much use! That was the case with my Swedish Sala loco. I built the loco in 2008 (see images from the building here) but its O-rings fell apart shortly after. Having had less than 1 hour of running time it was hardly a case of wear! With lots of other projects going on the Sala was set aside. In 2010 I went digital. The model was dismantled back in september for O-ring replacement and fitting of decoder. Since I have been working on the Sala now and then.
﻿
The design of the loco makes it necessary to remove the motor to detatch the upper body from the frame. In the future this will be made somewhat easier, as I fitted mini connectors to the wires from the current collectors to the motor. That way I can easily disconnect decoder plus wires and remove the motor. No need to pull out the soldering iron.

With the new O-rings in place I tested the loco before I installed the ESU-decoder. If things didn't work I wanted to be able to spot where something had gone wrong. While the micro decoder is small all the associated wires take up a lot more space. I'm usually reluctant to cut the unneeded wires, but this time I chose to loose them.

Before I assembled the loco again I fitted a few dials on the engine housing. I used dry transfers from Archer Transfers. I found the smallest dials on the set AR35209 to match the size of the kit's relief etched dials. I finished the dials by adding a drop of Kristal Kleer to represent glass.

With a decoder mounted the loco had to have an address, and that demands a number painted on the loco (or I will never be able to remember the loco's address).  Most locos on Danish industrial railways didn't have a number. In most cases they were the only loco a railway had. In case of more locos they could be identified by their colour, maker or by calling them names. Numbering was mostly used as a last resort. So with some reluctance I numbered the loco. Now the Sala has the number '3'. The numbers came from an old Italeri sheet, while the Nystrup Gravel-decals are costum made by 'Skilteskoven'.

I seem to be blessed with excavator related expiriences these days. Last week I stumbled over a tinplate excavator, today I could see an RB-10 in original condition work at the Graested Veteran Show. The show is a great gathering of all things mechanical more than 30-35 years old. Trains, tractors, steam engines, cars, military vehicles, threshers - you name it. Check the show's web site for info.

My favourite this year was a drag line excavator working in an 'contractor's corner' on the show grounds. The RB10 excavator will be known in some parts of the world from the TV programme 'Salvage Squad'. 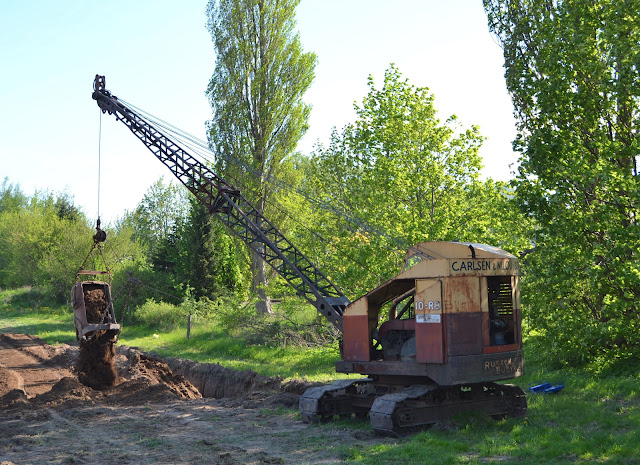 The excavator took working sessions with regular intervals and it was great to see the little machine work. Nystrup Gravel had a Ruston-Bucyrus of an older and larger type (RB17). A special feature on the RB10 at Graested was that it was in almost original condition. There was even traces of the original shipping address that made sure the machine arrived on the quay side in Copenhagen habour!﻿﻿

The programme 'Salvage Squad' RB-10 programme can be seen in four parts on youtube:
Part 1, Part 2, Part 3 and Part 4.

At my work table I'm still working with wires and ESU-decoder for my Sala-loco. That could be the topic of next blog post rather than yet another of topic excavator diversion!﻿﻿﻿

Any reader of my blog who has read more than a few posts will know that I’m fond of excavators and old machinery. Modelling wise I usually only exercise that interest in 1:35 scale - see this post. The other day I was charmed by a tinplate excavator at a flea market. The asking price was low and although I’m usually very hard to tempt I couldn’t resist bringing the toy home. The sheer simplicity of the toy, the bright colours, its size and the fact that it had Cyrillic letters impressed in its plate work was too much for me. (Having studied Russian I find machinery with relation to particularly interesting.)
The excavator certainly isn’t one of those antique British or German tinplate toys that fetch huge prices at collectors’ auctions. With Cyrillic letters I wasn't in doubt that it was of Eastern European or Russian origin. A search on the internet showed the letters to be an acrynom for 'Avtomobilny Zavod imeni Leninskogo Komsomola' (no wonder they needed the acrynom!). Apart from the famous passenger car 'Moskvitch' AZLK apparently also produced toys. Judging from this article, their toys were well made and heavy. From the article (well written and worth a read, by the way) it seems AZKL stamped year of manufacture into their toys. In that case my example was made in 1972. From my knowledge the toy is not attempting to look like any known type of Soviet excavator.


As a toy the excavator must have been taken rather well care of. Its condition can be described as only less than pristine. The two wheel axles are a little bent, it seems the original wire has been replaced and there is minor scratching of paint here and there. Judging from a single image found on the internet my excavator is missing all the windows that were originally fitted. But there is no sign of rough handling and I found no deposits of sand or dirt in the excavator’s nooks and crannies. The excavator even came with an extra clam shell bucket (made from 2 mm steel) to complement its face shovel rigging.

Now only two things are needed. Figure out where to display the big excavator and perhaps give the machine a minor overhaul. Should you, dear reader, know more about the excavator’s origin or history, please leave a comment.
Posted by Claus Nielsen at Friday, May 17, 2013 No comments:

One of the great advantages of narrow gauge industrial railways were their ease of construction. The steel sleepered track panel was a major contributing factor. The steel sleeper came in several designs, but all of them rather difficult to model in 1:35. Several modellers have been working on scratchbuilding the sleepers from different materials, some using plastic profiles others experimenting with 3D-printing.
Recently James Coldicott released a range of steel sleepered track panels in resin. It is now possibly to order lengths of track, both straight and curved, just like a company in 1922 would have ordered track panels from Orenstein & Koppel, Dolberg or Decauville. I couldn't resist the temptation to do as any sensible industrial railway operator did in the past, so sent off for 5 straight and 5 curved panels. As I use 16,5 mm gauge I ordered the sets 20S18 and 20T1 - as below.

Find the track panels on the website of James Coldicott complete with link to ordering and payment. On the website you will also find a most useful PDF document with prototype information and advise on how best to lay the track segments. No excuse for not trying! The design of the panels has rendered the thin profile of the steel sleeper ends very well. Without compromising structural strength of the panel. The resin bar beneath the rail profile can be removed with care if you should want to recreate a sparsely ballasted track. See two close ups of a straight track panel below. 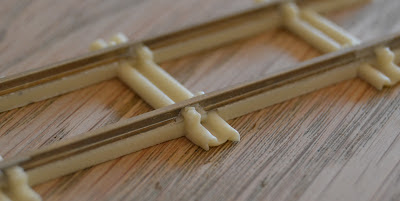 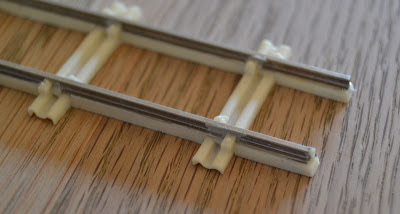 I plan to install a stretch of steel sleepered track on a future module, perhaps with the odd wooden sleeper added for stability. On Nystrup Gravel's lines most of the orignal 10 kg/m track on steel sleepers didn't last long into the 1930's but on some straight parts it wasn't replaced until much later. Straight track isn't influenced by the same forces as curved track, so the gravel company spared heavier rail and better sleepers where they were most needed.
Posted by Claus Nielsen at Sunday, May 12, 2013 2 comments:

The Jung ZL 114 is now ready to serve my 1:35 scale model of Nystrup Gravel. After painting, weathering and fitting of decoder the loco is merrily trundling back and forth with skips making sure the company's good quality gravel is made available for the costumers.﻿﻿ See more images of the finished loco and building proces.
As I fitted oil can and bucket under the driver's seat I broke the resin gear lever (why do I always seem to break off details while finishing a model?). I replaced it with a cut down steel pin - supplied with my latest shirt's packaging. The oil can is from Accurate Armour (with decals from Plus Models) and the bucket is from Tamiya. While I was working on the weathering I noticed that the model was lacking an exhaust pipe. I fitted a small length of aluminium pipe in front of the right front axle. Most will probably not notice the pipe, but now I know it is there.﻿ The cab roof is still unglued as I have yet to find, build and fit a driver.

While building the Jung-loco I also managed to finish a Scale Link-skip and do some work on refurbishing my Sala-loco. Sometimes it is possible to do the same type of tasks on several models at a time and that speeds up construction. When the soldering iron is hot and the air brush loaded with paint, why not get some work done?
Earlier posts on the Jung:
Assembly finished
Assembly started
Kit received

Email ThisBlogThis!Share to TwitterShare to FacebookShare to Pinterest
Labels: locomotives

Recently I located an old binder with documents from Nystrup Gravel. In it were correspondance between the gravel company and several loco manufacturers. The material is too comprehensive to be shown in its entirety on this blog, but I have included a few scans of some documents below.

The first two documents are from the Danish loco manufacturer Pedershaab. Nystrup Gravel had at least one loco from Pedershaab, a green loco numbered 14 with a home built wooden cab. From the correspondance it seems the loco arrived at Nystrup no later than 1955 when Pedershaab supplied the gravel company with info on how to keep the transmission chains tight and well greased. The second document is a page from earlier sales material found in the binder, indicating that no. 14 was perhaps originally delivered with a Danish built BurWain engine.
﻿
Also in the binder was an offer from the other large Danish manufacturer of industrial railway locomotives, Nagboel. In 1951 they made an offer to Nystrup Gravel on several types of locos. Their listing of models and prices is a rather rare find. There is no indication that Nystrup ever bought a Nagboel loco.
﻿