While I had my stash of plasticard on the workbench to build the model of Nystrup's first IC loco, I also started the doors for the loco shed. Should have done that years ago. Now I have laminated two sheets of Evergreen's grooved plasticard and made the pieces fit in the door opening. I'm now in the process of trimming the doors to enable them to open (the have to clear the ground in front of the shed).

While making two small doors out of plasticard surely isn't a huge accomplishment, I'm pretty happy with it, as I have finally pulled myself together to get the job started. Other projects that I have been more drawn towards have overtaken the doors' place on my to do-list for several years.
When the doors are in place I will also replace some of the lighting in the shed and add further lights out doors. The welding light module I have had laying about for years will be fitted too.
Posted by Claus Nielsen at Wednesday, May 28, 2014 No comments: 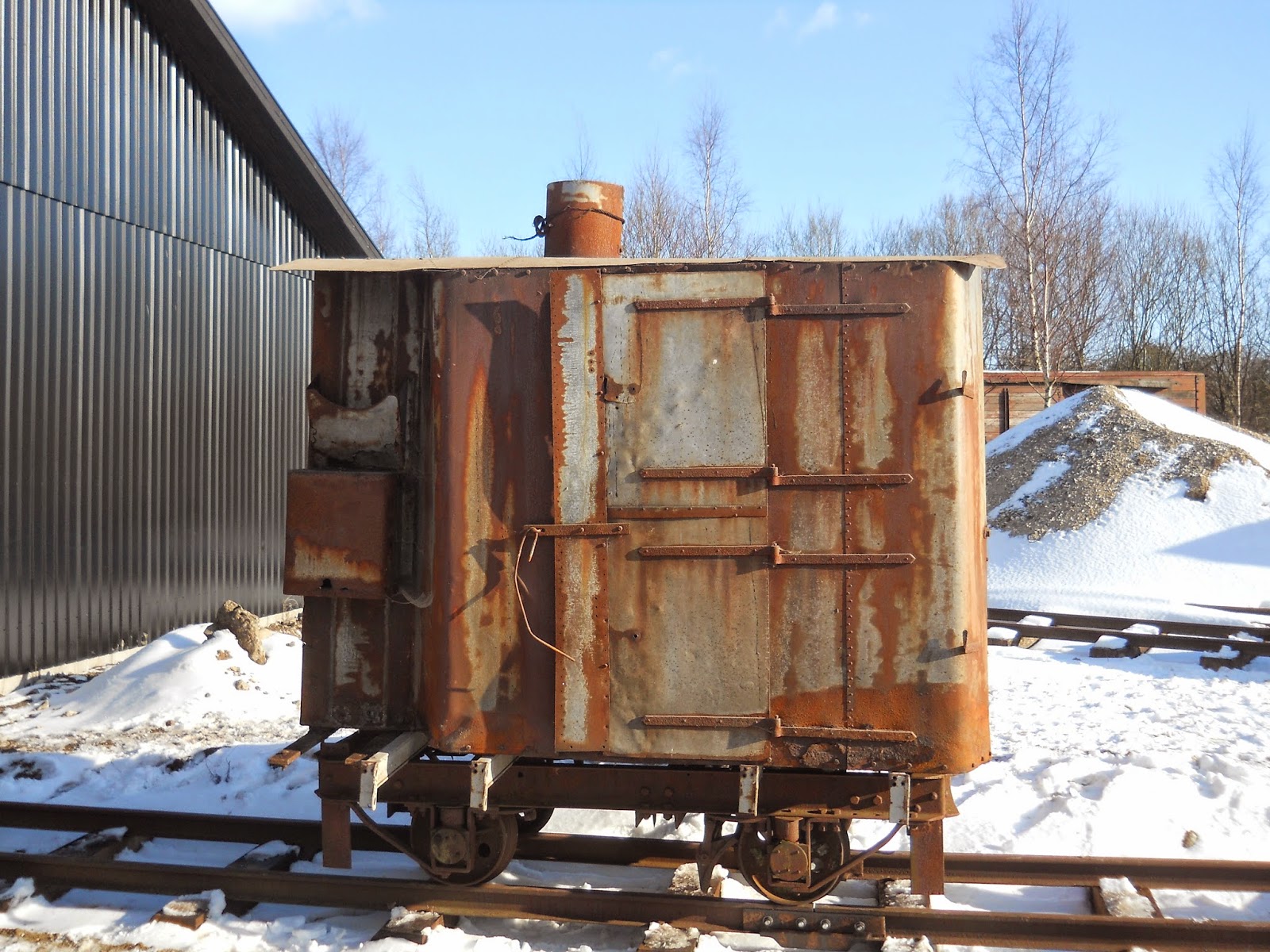 My considerations as to colour ended with the Simca being painted a medium blue (a 50/50 mix of Vallejo 'Light Sea Blue' 71089 and 'Steel Blue' 71087). The wheels were painted 'Golden Yellow' 948 and the hub caps sprayed chrome. The green paint has been reserved for another car currently on its way from Brazil (my first resin kit from Brazil!).

I fitted a suitcase from Plus Models in the car's open trunk. Plus Models have a large selection of good quality detail parts in 1:35. They may be a little pricey, but you don't need many parts to fit out a scene in 1:35.

Besides the suitcase and a small bag on the passenger seat, I only added license plate decals. Otherwise the little car is straight out of the box. While I assembled the kit in no time, painting took quite some time. The process of priming and air brushing cover paint and varnish is time consuming. Especially on an open topped vehicle where you have to mask the interior carefully to avoid over spray. Everything worked out OK. Only when fitting the last windscreen wiper I had an accident. The wiper flew out of the pliers and landed on the bonnet. Unfortunately the wiper had a drop of CA glue on, and it fastened to the bonnet instantly. I had to wrestle the wiper off and repair the paint.

The model I'm currently having on my workbench is anything but out of the box. A one cylinder oil engine locomotive - Nystrup Gravel's first loco with an internal combustion engine. And I must be getting those doors for the loco shed done as well!
Posted by Claus Nielsen at Wednesday, May 21, 2014 No comments:

Email ThisBlogThis!Share to TwitterShare to FacebookShare to Pinterest
Labels: cars

A steady stream of 1:35 kits of civilian cars have been arriving on the market lately. Made by the same companies that usually do kits of Tiger-tanks and other military hardware. The civilian cars are very useful on a model railway like mine. The car now on my worktable is the little Simca 5 from Tamiya.

The Simca 5 was designed in Italy by Fiat and produced at the Simca plant in Nanterre, France from 1936. It was a tiny car designed for the ordinary family (like the German Volkswagen) and able to travel 110 km on just 5 litres of fuel. The last Simca 5's left the assembly lines in 1949. In Nystrup the Simca is owned by the accountant of the gravel company.

The Tamiya kit is a great little kit and with only 57 parts the car is quite a fast project - see here for a review. Contrary to a company like ICM (I have built their kit of the Opel Kapitän) that designs kits with countless tiny parts and akward assemblies, Tamiya uses a different approach with few, well designed parts that assembles with ease. For a 1:35 railway modeller that needs a nice little civilian car and doesn't fancy fiddling with a kit with myriads of small parts, the Tamiya Simca is an obvious choice. Notice that Bronco has also made a kit of a the Fiat-version of the same design. With a lot more parts.

Because I'm modelling in 1:35 I can model Nystrup's local fire brigade's Mercedes fire engine (made by two companies: ICM or MiniArt), an Opel bus is announced from Roden and an American Packham should be on its way from ICM. What I would really wish for was a little post war British car like the Morris Minor.
Posted by Claus Nielsen at Saturday, May 10, 2014 2 comments:

I got the sidecar fitted to the scooter without too much trouble. As I stated in the last post on the scooter there are some quite flimsy parts to be joined. Otherwise the kit is like other 1:35 kits from Plus Models I have built: well moulded, detailed and with a good fit.

I airbrushed the scooter Vallejo Model Air 'Fire Red' (71084). I fitted the Gulf decals from the kit's decal sheet. The Gulf-logo is that used by the oil company between 1936 and 1960, although I don't know if there ever was a Cushman scooter in service with Gulf markings in Denmark. In Nystrup the scooter is used to supply small quantities of motor oil and grease to local companies and farmers.

On my workbench now is the Tamiya Simca 5, a Danish one cylinder oil engine loco and doors for the loco shed. I have put off the task of fitting doors for far too long. Now the time has come!