No, it's not a substantial infrastructural upgrade for the little gravel line! I seldom receive Christmas presents with a railway modelling content. My interests in scale and theme are too narrow and specialised. Christmas 2021 was a different year as my father presented me with a wooden turntable from IKEA. The turntable is designed as a 39 cm diameter rotating tray for smaller dishes etc. I will not be using it for its intended purpose, but as a useful tool for air brushing difficult to handle models in 1/19 scale.

I received the turntable as a gift, but should you want to aquire one yourself it's quite affordable at 10.5 € in IKEA stores worldwide under the name 'Snubba'. The turntable spins easily even when loaded with a heavy locomotive. The diameter is sufficient for every model that can be put in service on my little gravel line and doesn't take up too much room on the worktable. When stored it can be squezed in between two boxes.

Posted by Claus Nielsen at Saturday, January 22, 2022 No comments:

During the last months I have from time to time built, painted and installed a humble wooden fence on my little layout. Not the most celebrated type of structure, but very fitting to the simple prototype I model. The fence is acting as a view blocker at the layout's right end. In that way it is possible to diminish a spectator's impression of the small layout abruptly coming to an end. Some careful work with a photo backdrop will hopefully help to produce a good result. Using structures to channel a spectator's view and to conceal the background can be expertly executed by talented modellers like Swedish Anders Runnholm in 1/35 scale. I'm inspired by the ingenuity and modelling and try to use some of the tricks on my own layout.

The fence was built from coffee stirrers on a framework from wooden profiles and assembled with standard PVA glue. I aimed for a slightly crooked appearance without it looking completely ready to overturn. When the glue had dried I painted the fence red with a few boards standing out in grey natural aged wood. The painted fence was then mistreated with a knife blade and sandpaper and a different shade of red painted over a few of the boards. The fence was then given a wash of heavily diluted dark brown oil paint. Once dry the fence module was coated with a layer of matt varnish from a spray can. I resisted the temptation of painting political slogans on the fence or fitting posters.

The fence is placed at a slight angle to the fuel shed to avoid structures and track all being at right angles to the baseboard edges. For the time being the fence is only fitted loosely into the holes poked in the soft baseboard. Once detailed ground cover, grass and vegetation are in place I may eventually glue the fence in place.

My fingers were itching to test the new RTS Greenkeeper and between Christmas and New Year I managed to try the gadget and 2 lengths of grass on a few scraps of cardboard. As it was my first use ever of a static grass applicator I was of course very interested if I could get the machine to produce a decent result. 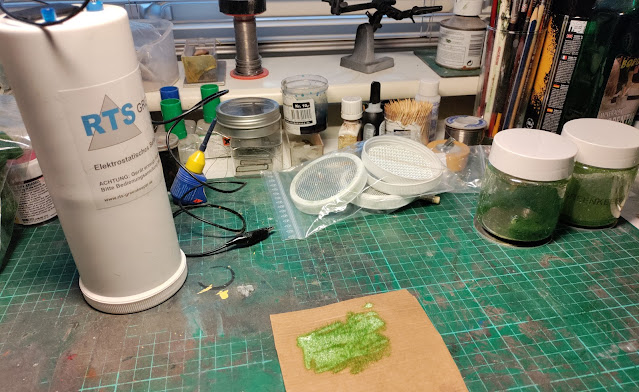 With the preliminary experiments succesful, I have ordered and received a further supply of grass in lengths of 9-12 mm. In combination with the grass supplied with the Greenkeeper, I hope the mix will provide a good variety for making the unkept and irregular grass around the tracks on the layout.

In advance of the work with adding grass I have begun further ground detailing under the lorry ramp.

To achieve a rough surface under the vegetation I covered the areas outside of the gravel with used ground coffee. I dry a portion on an old newspaper and glue the coffee in place with undiluted white glue. As the coffee is much too dark in colour, I flowed a diluted mix of lighter earth colours over the coffee areas to lighten up the colour but still making it darker than the gravel areas.