On an ordinary day in the summer of 1952 the trains ran along the little gravel railway belonging to Nystrup Gravel. Just as they did almost every other day, year after year. This summer day in 1952 was a little different, though, as there was a photographer present.

And despite all the normality of the day, one of Nystrup Gravel's workers was missing for the day's work. The day before he had to report at a military facility as he was called up for duty as part of the first large scale mobilisation exercise in Denmark since the war.

Posted by Claus Nielsen at Wednesday, July 29, 2015 No comments:

After almost a year of inactivity I finally got my project to build a model of an ancient Danish built oil engine loco going again. Shortly after having started the build, I had the luck of finding works drawings of very similar loco. The drawings made me realise I had to change the wheel base and length of the model. An extension of plastic card took care of the length last year and a new BullAnt from Australia fixed the wheel base this summer.
With the longer wheel base I had to grind out a bit more room for the wheels and flywheel. I used a mini drill to remove the offending plastic. Other than that no other modifications were needed for the new BullAnt.
The loco body has now been clad in a layer of 0.1 mm. plastic card and a raised panel glued on. This is the kind of plastic building I really like, Plain work with knife and steel ruler, glue and file. Next stage will focus on the frame and buffers/couplings before moving on to roof and smaller details on the body.

One of my vacation projects was the MMK resin kit of a Bedford O and heavy load trailer. I assumed it would be an easy task right out of the box. Having studied the instructions a little closer and handling the parts, I realised that the build wouldn't be as easy as I thought. Most parts are well moulded and relatively easy to separate from their mould gates. Both lorry and trailer kit lacks location points and as the instructions aren't particularly helpful it is a challenge to find out precisely where many parts go. As a single misfitting part would prompt an avalanche of faults I built the lorry kit in a different sequence than advised in the instructions.


The lorry cab is a nice casting but care must be taken when removing the flash in window and door openings. The cab interior is sparse (as it was on the original lorry). I had to substitute a steering wheel and column as the kit part was broken. Some of the parts are from etched metal and are quite nice. I'm wondering if I should leave a cab door open to show the details?

I have now started three weeks of vacation. Except for some house maintenance tasks nothing is scheduled - not even a trip abroad this summer. I'll be spending the vacation home and in the cottage. I suppose that will leave a little time for modelling now and then.

I hope to be able to focus on my model of an ancient Danish built one cylinder oil engine loco picking up where I left last summer. A new Bullant from Australia is on order with a better match to the drawings than the one I fitted first.
Having just about finished a somewhat problematic lorry build what would be more obvious than to start another? It will however not be a kit bash or a conversion but a (probably) nice and easy out of the box-build. The object is a Bedford O with a heavy load trailer made by the Czech company MMK. I only plan to add some small parts and a set of specially designed decals making it a vehicle with a clear reference to one of my railway friends.

Could I squeeze some work on my newest module in, I would be glad. I'm really looking forward to getting the track down and tested - not to mention starting on the buildings.
Posted by Claus Nielsen at Thursday, July 09, 2015 No comments: 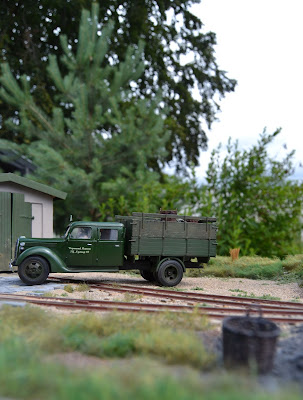