Roof, doors, windows and a chimney

No, it is not a house I'm building but an ancient internal combustion engine locomotive. After having finished most of the tasks on the frame, I progressed to the upper body of my Alpha E 10 loco. I decided to make the roof from plastic card despite my worries that it would turn out too fragile. I threw all caution to the wind, cut a piece of plastic and stuck it to a can of spray paint with tape and rubber bands. The can was repeatedly doused with boiling water followed by cold water from the tap. The plastic card took on the can's radius and fitted quite nicely on the loco. It was glued to the roof ribs with my standard Revell plastic glue and held in place over night with a generous amount of tape while drying.

In my last post on the loco I mentioned that it had a tendency to 'lean forward'. I added thin shims of plastic card under the front attachment point on the frame and gradually I got the loco to sit level to the rails. The shims were glued to the frame while making sure gears and wheels still turned freely.
To fit a driver figure I glued a small platform below the open top door on the inner left side of the loco. Through a hole in the platform I can fix a bolt (my standard M2, of course) into a nut glued into the figure. This enables the amputated figure (mentioned previously on the blog) to be removed when the loco is parked idle. It may seem an awful lot of work, but I really think driver figures have to be removable in 1:35 scale. If not they attract far too much attention. Parked locos aren't supposed to be crewed by vigilant drivers!

Posted by Claus Nielsen at Friday, November 20, 2015 No comments:

This is not about glue malfunction rather the result of 'Unintended Mechanical Stress Leading To Parts Separation'. I have finally begun to repair the damage inflicted on some of my models during my move last December. The damage list was as follows:

I had expected worse things to happen. I wouldn't hesitate to conclude: the move has been kind to my modelling. What's even more important the list isn't showing a single loco or piece of rolling stock. Most of that is kept in foam lined wooden boxes and as such are much safer to move. I think it shows that good quality boxes for one's cherished models is a good investment.

Repairing wasn't too difficult. Only the steam roller repair presented  a fair challenge. After the fallen off pieces were united with their models again I touched up with a little colour where paint had fallen off or glue had seeped out. The problem is to remember exactly what paint I used when I built the models.

Posted by Claus Nielsen at Sunday, November 15, 2015 No comments:

In the months leading up to the liberation of Denmark in May 1945 a group of the local resistance movement north of Copenhagen built their own improvised armoured car. They named it 'V 3' (a reference to the German 'Vergeltungswaffe' V 1 and V 2). Not known by many, another armoured car was built by a group of resistance fighters from Nystrup and neighbouring Skovby. 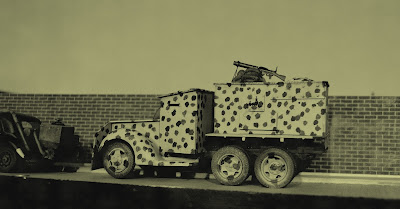 The resistance movement probably expected fighting around the large German air field at Mellemaaen. It turned out that the air field presented no problem, but V 4 saw action when it stopped a car full of fleeing 'Hilfspolizei' HIPO at a check point. The HIPO was manned by Danes in German service, spreading terror and fear in the last years of the German occupation.

The group must have been in contact with the designers of V 3 as the cars' layouts are very similar and the Nystrup car was named V 4. In some ways V 4 was more advanced, taking advantage of a three axled lorry to carry more weight and thus better armour. In places the armour was spaced to provide better protection for the 5 man crew.

My model of the V 4 was built completely out of the box - the spares box! I used an old GAZ-AAA lorry chassis and the front mud guards are leftovers from a ICM-kit that came with two sets. The rest is basically plastic card with only the hatches added - again from the spares box. Armament consists of two German MG34's and a British Lewis machine gun.


In contrast to V 3 the V 4 was elaborately camouflaged with green and brown dots on a light grey background. As the unit building it was a combined conservative/communist group it sported both the British colours of the resistance movement and a red star - along with the Danish flag. With such prominent markings the idea of camouflaging it escapes me, but I suppose the painters had a lot of fun!

The crew manning the car had fighting experience, a rare thing in the Danish resistance movement. A period newspaper mentions that two of the communists had fought for the Republic in the Spanish civil war, while one of the conservatives had been in Finland in 1940 to help defend the country against the Soviet attack. Another from the conservative group had fought in a British financed Danish 'private army' against the Soviets in Estonia in 1920 (it's his Lewis on the roof).
Posted by Claus Nielsen at Friday, November 06, 2015 No comments: