A Short Stretch of Road

With countless road vehicles and modules with very limited road facilities (I'm building a model railway after all!) I have been missing a place to photograph my lorries and cars. Now I have built a short stretch of road to enable my road vehicles to be photographed on a proper length of macadamised local road.
I planted grass in several tones along the roadside and added a few clusters of higher plants as well. When the glue had dried I placed a layer of gravel between the plants and road and fixed it with a mix of water, white glue and washing up liquid applied with a syringe. In this state the 'road photo plank' was ready for its debut acting as a scene for steam roller and living van. 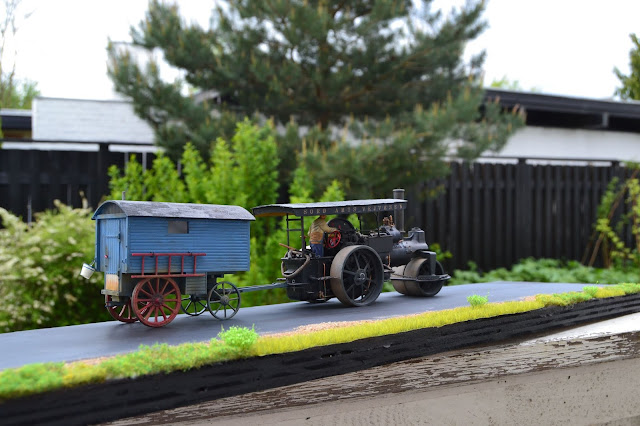 I decided to fit some telegraph poles at the roadside although they are too close to the road to be completely realistic. That will however hardly be noticable on photos. On my shelves I found sprues with parts to make some 1:35 plastic telegraph poles. Not particularly detailed, but sufficient for this simple photo diorama. The poles are from Italeri (kit no 0404). The poles were assembled, painted and weathered. I mounted a length of brass wire in each pole to allow them to be easily planted in the 'road plank'. The brass wire also worked as a handle during painting.﻿

On my recent trip to Wales, I picked up a few pieces of slate at Ffestiniog. Some of them have suddenly appeared on some of Nystrup Gravel's 1:35 flat wagons. No slate was naturally present around Nystrup so the slabs are probably imports on their way to Ericsons Stenhuggeri (Ericson's Stone Masonry). It was a small affair some 100 m from the Nystrup tracks. It sometimes had stone slabs delivered via removable track panels.﻿

A Trip to Wales

I had never been to the British Isles with the specific intent to study railways. Last week I was on a four day tour of a small selection of narrow gauge railways in mostly Wales. Me and a few pals travelled in the company of a party from the Swedish Industrial Railway Society.

First stop was at Statfold Barn Railway where a fantastic display of locos were steamed up and running in addition to the static exhibits in the roundhouse shed. While I like small internal combustion locomotives the sheer number and standard of finish of the steam locos didn't fail to impress me.

Next on the programme was a visit to Welshpool & Llanfair Light Railway including a very pleasant ride in a comfortable coach over some of the best track I have ever experienced on a heritage railway. My compliments to the permanent way team on the railway!

We hadn't time for a trip on the Bala Lake Railway and arrived too late to see the last train for the day arrive at Llanuwchllyn station. We did see 'Holy War' (Hunslet 779/1902) and visiting 'Hugh Napier' (Hunslet 855/1904) from Ffestiniog simmering outside the loco shed.


A railfan trip to Wales wouldn't be complete without a visit to Ffestiniog Railway. Our small party was treated to a behind the scenes-tour of the workshops and sheds at Boston Lodge. I was surprised by the amount of clutter and oil spillings in the workshop, but surely the results made there speaks for themselves. A marvellous railway I hope to visit again.

On the Vale of Rheidol Railway we travelled from Devil's Bridge to Aberystwyth. As on all the railways we visited on the tour, we travelled in our own reserved coach, allowing us to shift from side to side to enjoy a particular scenery on one side of the track, an interesting track layout on the other etc. A tour of the 2012 built workshops was included and made a most contrasting experience to the visit at the Boston Lodge works.
Also included in the trip's programme was a visit to the first preserved railway in the world, the Talyllyn Railway and the neighbouring narrow gauge railway museum. Being a 'track guy' I loved the variety of old rail and track at the museum. An aspect too often overlooked in museums. A point I will bring back home to the vintage railway where I spend some of my sparetime.

The journey gave good inspiration to future intiatives on the Danish vintage railway where I work as a volunteer and I also picked up a few ideas for modelling projects in the future.

Email ThisBlogThis!Share to TwitterShare to FacebookShare to Pinterest
Labels: trainspotting

Having finished the living van to accompany the steam roller I couldn't resist taking on building a two wheeled water trailer to be added to the road train. I couldn't find a Danish water cart that suited my taste, but a British one had caught my eye. Very simple and of a lovely 'art noveau'ish' style.

My water cart is completely made from left overs from other kits, a few lengths of copper wire and plastick stock. A true piece of budget modelling! My model isn't a direct copy of the British cart, but rather my rough representation simply capturing the main shapes. 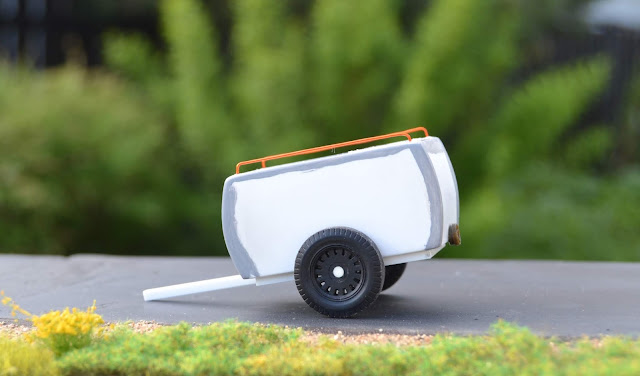