With corona restrictions still in force over most of Europe it seems that many collectors are using the time to clear closets, attics and spare bedrooms from unwanted items. From Spain I recently aquired a Schuco Lanz HR 9 in mint condition. An interesting model and very appropriately there was a Lanz 'Eil Bulldog' like it on the roads around the real Nystrup from the late 1930's.

I have always liked tractors fitted out for road transport, often pulling several trailers. I had plans for a complete road train in 1:35 scale, but never got round to build one. At least I now have the tractor. The Lanz HR9 model D2539 was manufactured over a wide span of time from 1936 to 1954. The D 2539 was powered by a one cylinder engine with 55 hp, a winch, and a closed cab protecting the driver from the elements and the dust kicked up by the tractor's top speed of 30 km/h. The Lanz roaming the roads around Nystrup was owned by the local haulage contractor Hansen, who was the major hauler of timber from the woods in the area and of course a lot of the gravel dug up by Nystrup Gravel. Hansen also employed a steam tractor (which I have also recreated in model) and had a small fleet of lorries. When the Lanz arrived in the late 1930's it regularly hauled double the load as managed by Hansen's small Ford AA lorries.

The German company Schuco has a long history of making road vehicle toys and models. The Schuco models have a good level of detail and not too many of the rather clumsy parts seen on other large scale pre-assembled models. Still there are some parts with visible mould lines and the trailer sign on top of the cab is quite a coarse representation. Nothing that can't be fixed with a little work, though.

As with every vehicle for use on my small model of Nystrup Gravel the Lanz will also receive minor detail upgrades, new parts, decals and weathering. As I'm currently finishing the Citroen Traction Avant and prepares for ground and track works on my modules, it will probably last a while before the Lanz gets on my workbench.

The early narrow gauge diesel locomotives by John Fowler of Leeds have always fascinated me. When I through my research discovered that Nystrup Gravel had a 1934 Fowler diesel loco I traced a Fowler for my then 1:35 scale version of the gravel company. I currently have a 16 mm scale Fowler in progress with an estimated delivery date sometimes in the first half of 2021 if Covid-19, Brexit and I don't know what isn't messing things up. I keep my fingers crossed!

The Fowler at Nystrup was probably originally meant for a customer in the tropics using Imperial measurements. The gauge on the loco was in fact 2 feet (610 mm) while Nystrup Gravel used 600 mm gauge. The Fowler was consequently slightly 'over gauged'. There is no indication from archive scources that the loco ever derailed more than any of the company's other locos.

When the Fowler arrived in Nystrup it was tested and used as a central attraction in PR activities by the then new director Holm at the gravel company. The local press, politicians and administrative staff from local government was invited to Nystrup as often as deemed necessary by the director. Besides having access to parts of the company's archive that policy has enabled me to trace the company history in the pages of the local newspapers. The article below (dated January 17. 1934) is just one example.

“The new diesel locomotive is a marvellous example of British engineering and technical proficiency. In its glorious coat of green paint it completely outshines the gravel company’s smaller gasoline locomotives 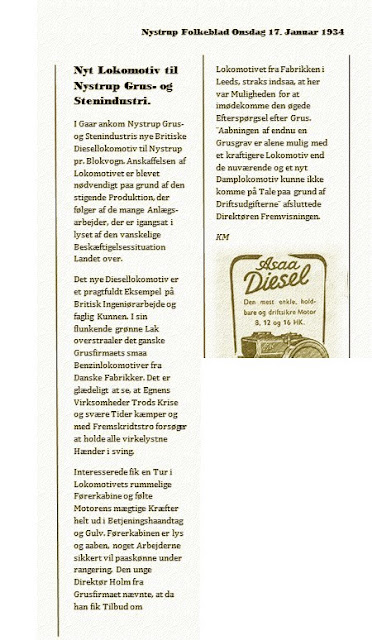 The visiting press was invited for a ride: “Anyone interested was treated to a tour in the locomotive’s spacious cab and could feel the mighty power of the engine vibrating in every lever and cab floor. The cab allows a flow of fresh air and provides a great view for the driver, something the workers will no doubt appreciate during shunting.”

No doubt the journalist hadn't much experience of loco driving in the cold Danish climate. Only on warm summer days did the drivers appreciate the cab designed for much warmer climates. Most of the year they were freezing despite trying to close the cab with a variety of tarpaulins and wooden boards. The floor vibrating with "the mighty power of the engine" also failed to please the workers for some reason.

Nevertheless the Fowler was one of Nystrup's primary locomotives for a number of years. It was out of service for most of the German occupation of Denmark 1940-1945 due to lack of spare parts. As soon as parts were available again it was back in service, being in use at least until 1959.

Posted by Claus Nielsen at Wednesday, November 18, 2020 No comments:

Working on the Traction Avant

Removing 4 screws  from the bottom of the car separates upper body and chassis - almost. I had to cut the steering column to achieve clean separation, though. By removing 2 screws I could also remove the dasboard from the upper body. This will help when toning down some of the rather harsh chrome finish applied to e.g. the rear view mirror.

The Maisto model's engine is moulded in a green colour not too far from the prototype's. I added other colours to the engine and the engine compartment. Mostly to hide the plastic look and to provide a minimum of realism when viewed through the open bonnet.

Next up is the interior that will need floor mats and treatment of dashboard as well as having weathering applied to the inside of the mudguards. License plates are to be fitted and both bumpers will be repainted after some light conversion work.
Posted by Claus Nielsen at Monday, November 16, 2020 No comments: