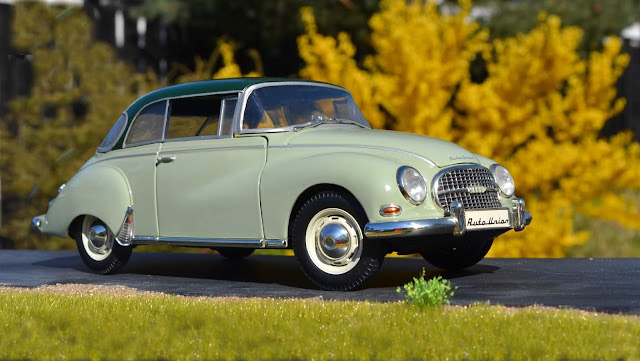 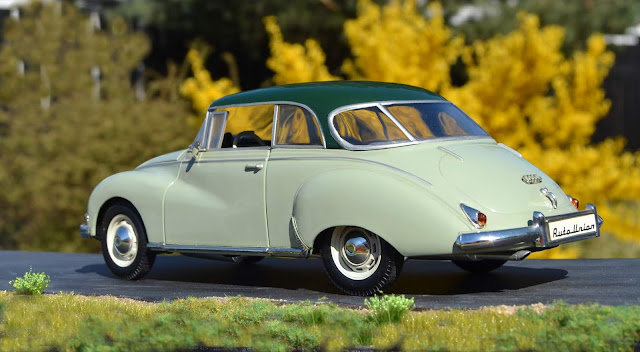 When I get around to it, the car will have Danish license plates, minor weathering and perhaps the rear license plate will have to be replaced? It looks enormous.
Posted by Claus Nielsen at Wednesday, April 17, 2019 No comments:

Progress on my Lister continues. I have fitted switch and charging socket under the bonnet and wires have been soldered on ready for conneting to RC reciever unit and battery. An open topped loco, the Lister has to have a driver installed and I have been wondering what figure to choose. I wasn't particularly satisfied with my first 16 mm scale figure from Modelu, but I finally decided to order another Modelu figure anyway.

The figure is Modelu's figure no. 1408 'Seated Workman'. I liked the sort of indifferent gazing of the figure. Just how I imagine one would feel running a slow moving Lister back and forth on a short industrial line all day long week after week. I'm now in the proces of adjusting the figure's rear end to fit the seat box - itself to be built now in plastic card to replace the foam board prototype.

I have also built a new brake column as the kit's original looked quite undersized and flimsy when compared with drawings. The new one was made from a piece of plastic turned with a file in a drill. A base plate from plastic was fitted with four bolt heads and glued to the bottom of the column. The top was fitted with two rings made from solder wire and the original hand wheel fitted.
More news about seat box and plastic surgery to the figure in a coming post. Hopefully I will also be able to report that the RC equipment have arrived. A considerable amount of time has passed since I ordered the items and although a patient soul I am increasingly growing tired of waiting.
Posted by Claus Nielsen at Monday, April 15, 2019 No comments:

On my old 1:35 scale Nystrup Gravel I had some rather good looking lorries made from kits and kit conversions. In 16 mm scale the variety when it comes to lorries is markedly smaller - to put it mildly. Unless you want modern tractor units there is practically nothing exept a few horrendously expensive Mercedes and Opels in 1:18 scale. By more or less coincidence I was lucky to find a Tempo Hanseat three wheel lorry on ebay and to win the auction quite cheaply for a closing price of 22 €. The model has now arrived and I have handled and examined it, finding it good value.
The Tempo Hanseat is an example of 'tax evasion engineering'. In Germany in the late 1920's cars not having four wheels were exempt from taxes and the driver didn't even have to have a license. Consequently several makers offered 3 wheeled delivery lorries to small businesses. One of those manufacturers was Vidal & Sohn offering 3 wheeled vehicles in several sizes and even a small 4 wheel van under the trademark 'Tempo'.


The model is the 1:18 scale Minichamps 1952 version of a Tempo Hanseat with the high load area. The vehicle has a removable tarpaulin roof of a medium decent quality. I will probably be using my Hanseat without it, as I plan to put the vehicle into service of a local craftsman. I will fit license plates and decals, tools and building supplies in the rear as well as adding a little weathering.
And how, may one ask, could I be fortunate enough to buy this nice model for 60-80 € less than the usual price on ebay? It didn't have a box. Without a box these car models aren't worth much on the collectors' market. Once I'm finished 'mistreating' it with decals and weathering the model's value will have gone completely. For a collector, that is.
Posted by Claus Nielsen at Tuesday, April 02, 2019 No comments:

On our way home from a company event a colleague/friend and I visited the remnants of a metre gauge railway closed and lifted in 1930. Despite being closed so long ago, surprisingly many traces remain, including several station buildings, bridges and long sections of embankments. While the station buildings may interest some, I find the bridges and earth works much more interesting. Probably because they have more relevance for the type of industrial railways I'm interested in. I have a hard time visiting dismantled railway lines without imagining how they would look in model fitted with scale track and trains.
Northeast of the small town of Almind there is a 600 m long very well preserved combination of cutting and embankment easily accessible from a gravel road. The curved cutting leads to an, by Danish narrow gauge standards, impressive embankment over a stream.


Further north in the small town of Gravens two steel girder bridges are preserved and marked as local heritage locations. From the former station building in Gravens, one can follow the old railway line for almost 3.5 km to the next station Brakker. Most of the distance laid out as a bike path or gravel road.
Kolding-Egtved Railway was opened in 1898 and built with 12.4 kg/m rails and untreated pine sleepers. Some of these were quickly replaced by steel sleepers as rot set in.