With the end of the year 2016 only a few hours away it's time to sum up the modelling fun I've had. Once again quite a lot has been going on. The year started with the arrival of a 1:35 scale Fowler from Australia. Designed, built and painted by Chris Millar the locomotive have had a few test runs and I also managed to build a driver figure for the loco. Lots of tasks remaining, though. The loco was one of my few purchases for Nystrup Gravel during 2016. I made a decision to try and clear away some of the kits and projects already sitting on my shelves. 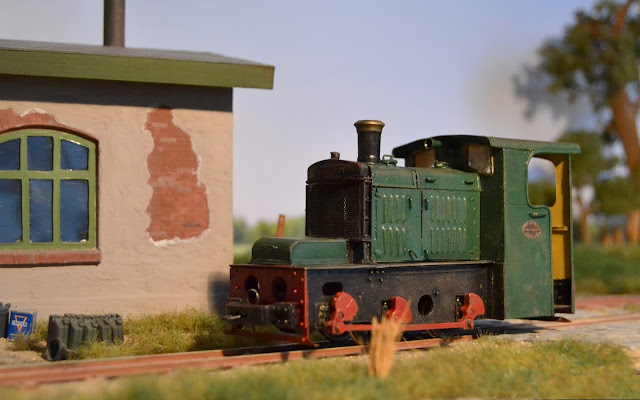 A nice summer made it possible for me to spend a lot of time on the porch. I have found that most modelling tasks can be done outside.  A result of the modelling done there was an almost finished new module showing the gravel line passing by the factory complex of Banke's Bakelite. For several years the little stream running under the 600 mm. tracks of Nystrup Gravel have been completely dry. In 2016 I finally pulled myself together to get the water done. I had heard a lot of modellers having trouble with the commercially available water products. I simply chose to paint gloss varnish on the stream's gravel bed. I built up several layers and liked the effect. 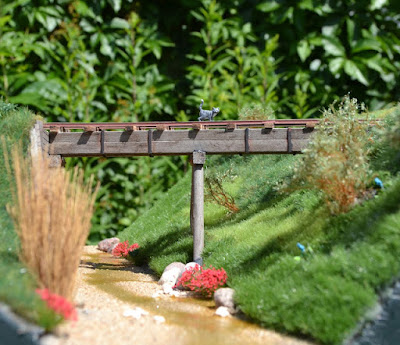 Anyone having read more than five blog posts here will know that I enjoy making road vehicles. During 2016  I finished a tractor for my trailer from the small building contractor 'Solvang Entreprenørforretning'. A bus also made it's debut on the roads around Nystrup. On both bus and trailer tractor I managed to get good masked and air brushed paint schemes. It seems that my painting practice finally paid off. 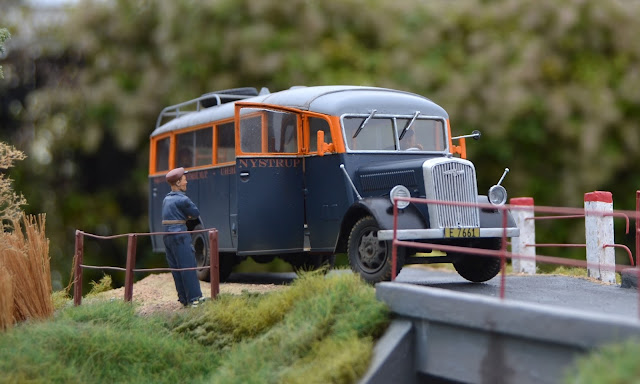 The year's last finished models were two Hudson bogie flat wagons. I had worked on them on and off during the last three years and finally made my mind up to finish them. Modelling is a hobby but sometimes it takes a little extraordinary determination to finish a project. Having the discipline to finish every model is an important part of my modelling - it helps me maintain focus and not start too many projects.

I hope to continue modelling the gravel company's little railway and parts of the environment around the line in 2017. Happy New Year!
Posted by Claus Nielsen at Saturday, December 31, 2016 No comments:

A few weeks ago a friend of mine suggested I build a Billing Boat wooden kit of a small Danish fishing boat in 1:30 scale. I thought the project a bit too large for my Nystrup setting. The idea of some kind of a ship had caught my mind, though. No place in Denmark is more than 50 km. from the sea and despite Nystrup not being directly at the coast line, I began to wonder how something like a miniature boat could be squeezed in near Nystrup.
The smallest 1:35 boat I was able to find was a German miniature submarine of the type Biber (Beaver). Luckily the Biber was one of three types of miniature submarines (Molch, Neger and Biber) found on the German airfield not far from Nystrup. Most of them were taken away for scrap in 1946-47 after evaluations by the British. In this way the presence of a rusty sub on a lorry around Nystrup wouldn't be completely out of the question.

The kit is from Italeri and quite easy to assemble although I put in some time getting rid of a seam along the top of the hull. As submarines really isn't what turns me on modelling wise I kept my own modifications to a minimum. I opend up a few of the bolted covers in the sides of the boat. To conduct technical examinations I suppose the British technicians removed them for easier access.
.

On my visit to the Berlin Technical Museum I had the opportunity to see a real Biber. Apart from its small size I was struck by the fact that the rudders were made from wood. As a weapon the Biber wasn't a success. Most were lost at sea because of mechanical failures, rough sea or because their 'drivers' died from carbon monoxide poisoning due to a badly designed exhaust system.

Posted by Claus Nielsen at Sunday, December 25, 2016 No comments:

Now that's a weird headline. But to me it's pretty straight forward, really. To be believable a model railway has to make a balanced and good impression. To me that means that all the elements of the model railway fit together. Period and theme seems to be major considerations for many railway modellers. It is for me too. I also try to get the same level of detail on trains, buildings, figures and road vehicles. To make everything blend together. Exactly like in reality, where a lorry isn't any less detailed than a locomotive.
As railway modellers we tend to focus on the trains. So much that most railway modellers don't even pay particular attention to track as long as it works. My idea of the ideal model railway is one with good overall detail and trains matching the surrounding landscape - in both theme, period, level of detail and weathering. Much like a three dimensional painting with movement.


I have participated in the Danish Gauge 1 exhibitions since the event was first held in 2010 and I have seen my share of bare plywood layouts with expensive locos and rolling stock. The contrast is striking and unrealistic. Nevertheless this years event showed how the Gauge 1 scene in Denmark is fast developing. From the huge collections of mostly German rolling stock and locos in 'out of the box-condition' running on naked plywood ovals. To kit and scratch built rolling stock with realistic weathering running on landscaped modules set up to feature end to end running. Nystrup Gravel didn't participate in this year's version of the event. Due to a tight schedule and career priorities I decided to skip the event. I hope to return to the event next time and enjoy even more Gauge 1 modelling!

Posted by Claus Nielsen at Thursday, December 22, 2016 No comments: 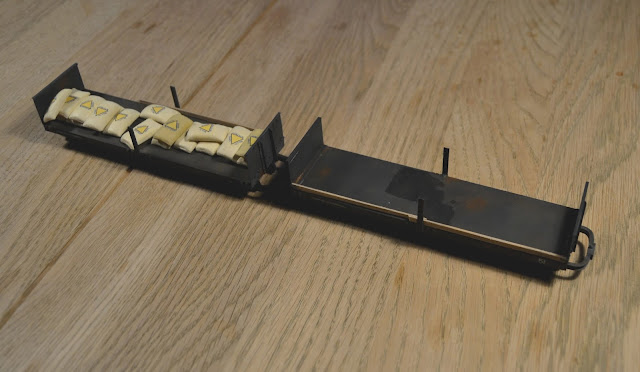 With a troubled history my two Hudson bogie wagons are now approaching the finish line. Being put back in a card board box several times due to missing parts or lack of motivation the wagons are now subject to a focused building and painting process. Fueled by the delivery of decals for the load of sacks and last week's progress on one of the wagons.
With new found energy I glued on the 68 rivets (made from thinly sliced strched sprue) on the remaining wagon and primed it and its two bogies. A few of the cleaned up resin sacks were quickly painted and prepared for decals. When paint and varnish had dried I fitted the decals designed for the sacks. As expected the decals fitted perfectly on the resin sacks from Wespe Models.

Next time you'll hear about the two bogie wagons they will be completely finished. I promise. You won't hear more about them for some time after that. I have a few other projects to tell you about in the time to come.
Posted by Claus Nielsen at Friday, December 09, 2016 No comments: