Having built models in 1:35 scale for more than 15 years, creating my little piece of a Danish 1950's gravel industry's narrow gauge railway, it's now time for a change. Not of  theme, period or company, but of scale. In the coming years I will be building locomotives and rolling stock from Nystrup Gravel in 16 mm scale - 1:19,05. Currently I don't know if I'll build a small indoor layout or perhaps use a corner of the garden. Time will tell. What is important is that my motivation for the new scale is high. I'm looking forward to new challenges.﻿


I'd never thought I'd be leaving 1:35 scale, but despite my conservative modelling attitude, keeping to one scale and theme for many years, I felt I needed to move on to something new. Even if I'm holding on to the Nystrup Gravel universe, the choise hasn't been an easy one. I've grown very fond of my 1:35 models, but will now begin a process of disposing of them as keeping them in boxes in the loft isn't a viable option. I will gradually offer some of the models for sale either here or on some of the forums I'm a member of.
﻿

1:35 has been a great scale for me and has brought me much enjoyment. I hope more modellers will discover the many possibilities the scale offers. It's a great scale for scratchbuilding, manufacturers are increasingly offering railway related products in the scale and regarding figures and road vehicles 1:35 is way ahead every of the other larger scales. Opportunities are almost endless.
﻿
Should you have an interest in a particular model feel free to contact me with a proposal on price. You are welcome to mail me at the company e-mail nystrupgravel@gmail.com
Posted by Claus Nielsen at Tuesday, October 30, 2018 2 comments:

On a Sunday where we had the first snow in Denmark this winter, I had several indoor maintenance projects. One involved some 1:1 interior painting and as I had the lid off the paint bucket and roller loaded with paint, I cleared my workbench completely and treated it to a new layer of white paint.
It is almost four years since the bench was painted last time. At that time we had just moved house and I was allowed to claim a larger area for modelling. Some will probably find my workspace cramped, but I like how on dark evenings, the darkness envelops me as I sit bent over a model in my little modelling cave.


As a consequence of my workbench clearing work I still have some indoor maintenance projects to do...
Posted by Claus Nielsen at Monday, October 29, 2018 No comments:

Email ThisBlogThis!Share to TwitterShare to FacebookShare to Pinterest
Labels: workbench

You may be excused if you think you have read this story before. In fact I have a Ferguson on the 1:35 scale Nystrup Gravel, and with the tractor being such a nice and classic piece of agricultural machinery, my new 16 mm scale version of Nystrup shouldn't be without one.


My new Ferguson is a Schuco 1:18 model which I aqcuired from ebay, making quite a good deal for 36 €. Having seen the model go for prices as high as 160 € I'm considering it worth the trouble creating a ebay-account.

The model is a quite an accurate representation of a Ferguson TE20 with low mounted exhaust. All the parts are there, placed in the correct locations. The wheels turn and the hood can be tilted to expose a detailed engine, petrol tank, radiator and battery.
There is some work to be done on the model in the future. Primarily some painting and weathering and the fitting of the characteristic circular, green license plates. I look forward to the task ahead.
Posted by Claus Nielsen at Tuesday, October 16, 2018 No comments: 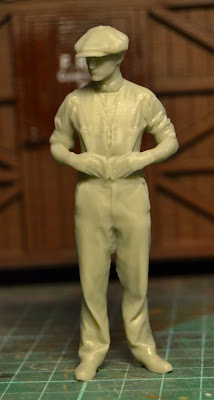 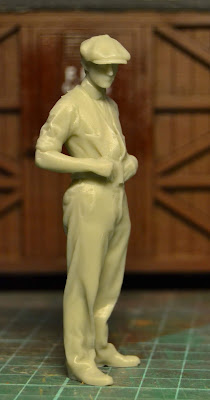 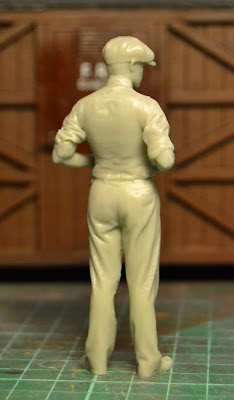 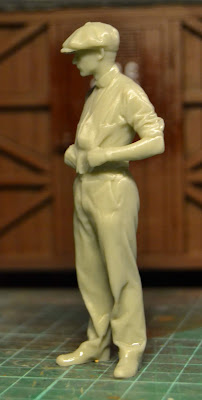 As mentioned I like the natural stance of the figure. In real life the figure would correspond to a person 175 cm in height which is a tiny bit higher than the average Danish male at 18 years of age at conscription in 1951. Choise of clothing is excellent and the soft facial details aren't too noticable due to cloth cap and position of head. So despite the soft detail I think the figure is acceptable and it is certainly light years ahead of most other figures in 16 mm scale. I plan to aqcuire more figures from the manufacturer.
Posted by Claus Nielsen at Monday, October 08, 2018 No comments:

After a long time, part spent working hard with preparations for the InnoTrans exhibition in Berlin, I am finally able to present my fourth finished 16 mm scale model. The I. P. Engineering kit of an early Ffestiniog brake van.

The model was built out of the box except for a minor reconstruction to allow body and chassis to be separated for maintenance and the adding of small details here and there. I added lamp brackets, bolts on the brake stand, door hinges and the large square bolt heads on both ends. I also rebuilt the buffers to be fitted with underslung coupling chains. The chains and hooks will be added later.

After fixing the roofs and adding tissue paper as cloth cover, I primed the whole upper body with Chaos Black and airbrushed it with Vallejo Air 71036 'Mahogany'. I added the decals from the kit, but used only the FRC and number. The decals needed much work to fit snuggly into the grooves between the planks. I had to cut the decals along the grooves to assist the decal fluid in making the decals fit.

I then used a wire brush to remove paint from worn areas and followed up with acrylic and oil paint as well as chalk powder to add weathering.The mahogany paint is gloss so I had to give the completed model a final covering of matt varnish. The varnish also helps protect the weathering.

Not being too familiar with the real brake vans I have nevertheless spotted some differences between drawings, different models and images of the original and the FR's new replica. Drawings of van 1 and 2 in Narrow Gauge and Industrial Modelling Review 38 and Steve Holland's build article of a Triassic Modelworks' kit in Review 78 helped during my build. Despite my doubts if the model is correct in every detail I think it is a good kit and will recommend it, not least because of its easy construction. Should I wish for one thing it would be the exchange of the wooden handrail on the brake platform with a metal part. I may fix that on my own model sometime in the future.

To add a splash of colour to this post's rather brown and dark grey impression, I have included two images from InnoTrans 2018. My part of the exhibition was concentrated mainly on relevant permanent way equipment and consequently a lot of my pictures are of yellow vehicles.

Posted by Claus Nielsen at Sunday, October 07, 2018 No comments:

My new adventures in 16 mm scale provides me with lots of surprises. One of them is the size! I still have to get used to the size of the models as they are very large compared to 1:35 (which is itself considered a large scale). Recently I had the request to place a skip next to an object of known size for comparison. I went to the refrigerator, picked out a can of beer and placed it on the worktable next to a few models.
The image provides an idea to everyone not accustomed to 16 mm scale, how large the models are. I predict I will have to keep a more tidy worktable to handle my future projects in 16 mm scale.
Posted by Claus Nielsen at Thursday, October 04, 2018 No comments: