My first 16 mm scale Modelu figure arrived and created mixed feelings. I was impressed by the pose and the overall impression was good, but detail was soft in many places. Particularly the facial detail was bordering on the unacceptable considering the large scale. 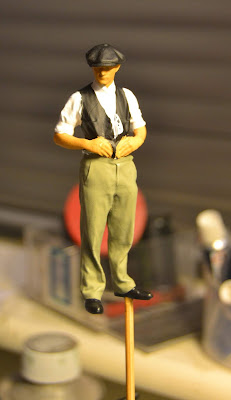 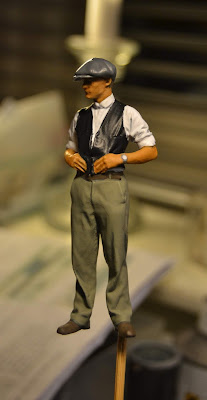 I cleaned up the figure with file and fine sandpaper. That treatment got rid of most of the very small attachment points from the printing proces. What took more effort was sharpening folds and demarcations between e.g. trousers and shoes. I managed to create a little difference of height in the worst spots.

The figure was primed with Games Workshop's 'Chaos Black' and painted with Vallejo matt acrylic paint. Folds in clothing were accentuated with darkened colours in the bottom of the folds and lightened paint on the tops. I highlighted  nose ridge, cheeks and chin with lightened skin colour. All skin areas had a very thin wash with rust oil paint to give the figure a tan matching an outdoor working guy.

On the figure's left arm was a weakly defined wrist watch. I tried to paint it as best as I could. For the watch's dial I punched a circle of ordinary white A4 paper and fitted it with clear varnish.

The figure now goes on one my shelves. There is a little more room as I after a remarkable fast proces have now sold and shipped a number of 1:35 locos and wagons to modellers around Europe. Less than 24 hours after having released a list of models for sale, most of the models had found new owners. Some was even sold before the list was released. I have been sent images of my models on their new owners' layouts. It's great to see them in action and serving their new owners well.