The local haulage contractor Hansen in Nystrup had a long history, even going back to owning a large number of horse drawn wagons and a traction engine. Their Garret steam tractor was the only from that manufacturer in Denmark and unusual in being service until after World War 2. The last year of operation is unknown, but the boiler inspector approved it for last time in Feburary 1950. When I saw a fellow 1:19 modeller assemble a 1:16 kit of a traction engine, I immediately started looking for a kit myself. 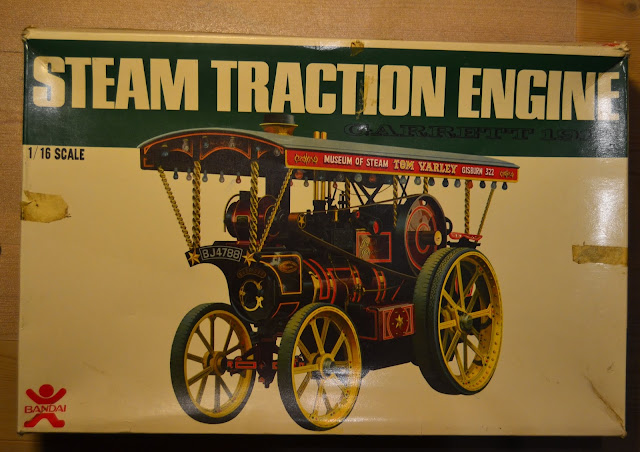 I was fortunate to win a kit on an auction on Ebay. Considering what I have seen other winners pay for their kits, I seem to have been lucky. Some of the prices seen are horrendously high! The kit from Japanese manufacturer Bandai is an ancient kit and much indicates that my particular kit was issued before 1978 (when I was in 2. grade). A historic kit in more than one sense!

The kit had been started and some of the major components was glued together when I opened the box. A few of them will need separating as I will not build the model as a showman's engine with generator, roof and colourful paint scheme, but rather as a worn haulage contractor's machine. The kit is a fraction too large for my scale of 1:19, but that will only help to make the model more impressive.
In addition to the build on the Narrow Gauge Railway Modelling Online forum, I have also found a series of images on a Canadian blog. The Canadian traction engine is much like how I want mine to look, only without the lengthened chimney.

I'm currently assembling the large rear wheels. I will be building the kit in a different sequence than prescribed in the instructions. I will build the model into a large structure first and then add the details.
Posted by Claus Nielsen at Monday, December 03, 2018