Solvang Construction can now finally start moving heavy equipment. The tractor for the previously built trailer is now ready for service. When bringing together the two units I added a little more weathering to the trailer to make the two models more like an entity. Ramps, blocks and some tools were added to the trailer as well.


Before I got so far, I added most of the small details to the model. The kit came without exhaust pipe. With part of the chassis highly visible even when coupled to the trailer, I made a exhaust pipe from brass pipe and slid on a length of larger diameter plastic pipe as silencer. On the inside of both chassis channels I glued thin copper wire to illustrate part of the braking system. Here and there I glued on a few bolt heads. The kit part for the instrument panel in the cab looked rather bad, so I did a new one from plastic card with holes punched for dials. The dials themselves are Archer transfers. 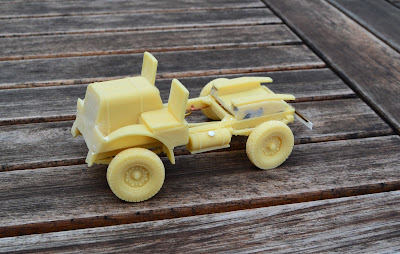 While the kit contained 15 parts for the chassis and 3 for the cab I added a total of 36 home made parts (not counting the 6 clear parts for windows). Some of the parts were added after painting due to the way the kit is designed. These included the steps under the cab which I made from folded up left over etched brass (never throw away anything, it may turn out to be useful in the future).

The lorry first received a cover of Games Workshop primer (with the 'war hammerish' name of 'Chaos Black').
As usual I applied the main covering of acrylic paint with my air brush. I used Tamiya masking tape to mask upper and lower cab. I managed to get an almost perfect demarcation between the two colours on the cab. Too often I have failed to apply the masking tape properly, used too thin a paint mix or have the paint bleed through the tape.

Decals were fitted on doors and front roof line as well as on the plastic card license plates. As usual the decals were made by 'Skilteskoven'. Front mudguards were painted gloss black. Small details were picked out in their appropriate colours, rear view mirrors and wind shield wiper fitted. I weathered the lorry to make it look like it had travelled long and dusty roads with its heavy load. I used a mix of oil paint washings and very thin mixes of earth colours through the air brush.


With this road vehicle project finished I'm moving on to work on other models that have lingered unfinished on my shelves.