In a recent post I mentioned that I had found a letter with info on Nystrup Gravel's Lister locomotive. From the letter it seems Nystrup Gravel was searching for a locomotive in the 4-5 t. range, but had to contend with a Lister. The steel and machine trading company P. C. Petersen informs the shop manager at Nystrup Gravel, Torleif Petersen that they have two locomotives on their site, but advise Thorleif not to buy them due to their deplorable condition. Instead P. C. Petersen's salesman suggests acquiring the Lister. 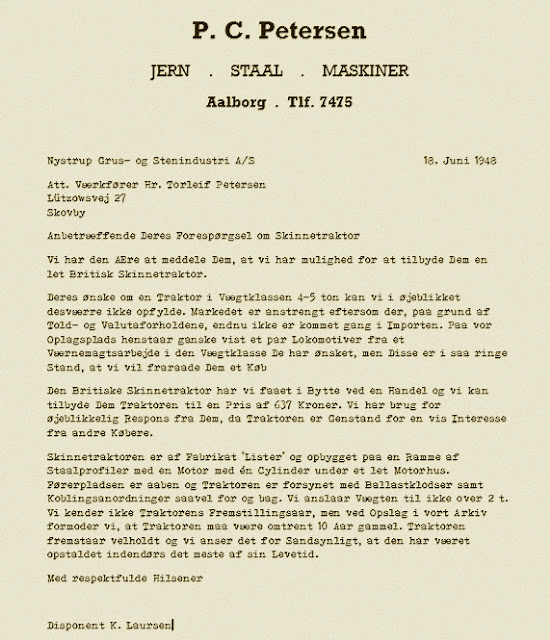 In the letter posted Friday June 18 1948 (obviously sent in a hurry as it remained unsigned) the salesman writes that the Lister has been taken as partial payment in a recent exchange of goods with another customer and that Nystrup Gravel can have it for a price of 637 Danish kroner. The salesman writes: "...we need immediate response from you as the rail tractor is the object of much attention from other potential buyers".

The salesman describes the Lister as "... built on a frame of steel profiles with a one cylinder engine under a light bonnet. The driver's position is open and the tractor is equipped with ballast weights and buffers and couplings both front and rear". The letter confirms old workers' reports that the Lister was a mid-thirties model bought second hand after 1945. The Lister was mostly used for light shunting duties at the gravel works in Nystrup and the occasional light permanent way train.
Posted by Claus Nielsen at Thursday, September 12, 2019