On the outskirts of the village of Nystrup a few small industries are squeezed in between Lilleåen ('Small stream'), the main road and Nystrup Gravel's 600 mm. track. One of them is 'Bankes Bakelit' that produces casings for electrical components. Visit wikipedia to learn more about bakelite. Bankes Bakelit is reliant on road transport only, but has once or twice (due to flooding) used the flat wagons of Nystrup Gravel to transport boxes of finished products to the nearest servicable road.

One of the company's lorries were a Ford V3000 and when ICM of Ukraine released a model of the V3000S in december 2010, I immediately bought one. See a review of the kit here.

Most of the assembly work is now done and I'm working on the cab interior. 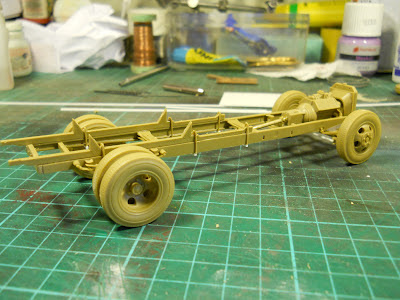 The lorries of Bankes Bakelit are painted in a red and blue livery with golden or yellow lettering.

Most of the company's investments must have gone into their lorries, as the factory over the years became quite dilapidated and closed in the early 1960's. Even before things really started to go wrong for the factory it seems like the management weren't exactly over budgeting on maintenance. In 1942 the wooden fence between the factory and Nystrup Gravel's track toppeled over and blocked the line. The old newspaper clipping below documents that a lorry during a parking maneuver leveled 25 m. of fence. (I hope to be forgiven for not translating the article to non-Scandinavians.) The article was kindly given to me by a former employee at Bankes Bakelit. 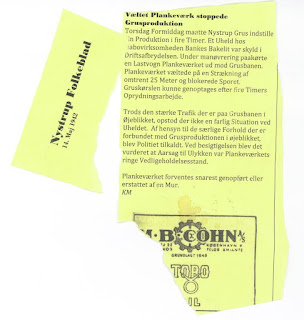