In my last post on the Ford AA recovery lorry I was well underway with painting and detailing. Since I have continued removing chrome trim, adding details like tools, wooden blocks and license plates. With a final layer of weathering the lorry is now ready to serve the Nystrup community and surroundings.

With window openings and windshield masked off I gave most of the lorry a swift pass with matt varnish from the air brush. Front mud guards and bonnet were then left alone while the rest of the vehicle received further coats of matt varnish and very fine coats of dust where appropriate. Where continued use would wear away dust (around crane and load area) I applied little or no dust. 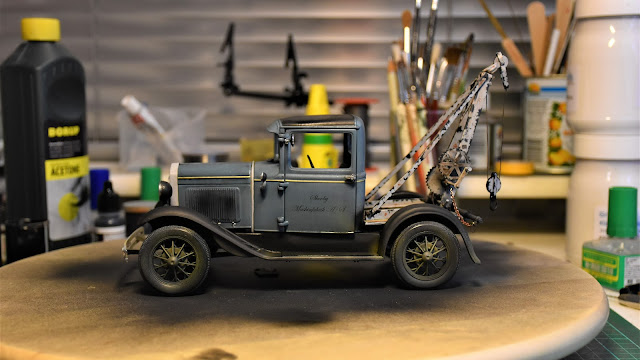 With matt varnish and dust applied, I gave the vehicle a a wash of heavily diluted black oil paint. The thin paint flows into panel lines around doors evt. and creates depth and shadows. Rust and scratches were first made with a very fine brush. When the paint had dried I added some thin washes of rust coloured oil paint around the rust areas. That represents new rust creeping out from the heavier rusted spots.

I had apparently mislaid several parts when I got around to the final assembly of the lorry. The screws for fastening the crane platform couldn't be located and I had to superglue the platform in place. The lid on top of the radiator also had to be made from two pieces of plasticard as the original was lost. The circular shapes were easily made with my punch and die tool.

Oil and grease on the crane's gears were made with glossy black paint and I used graphite powder for the worn metal handle on the crane. A soft pencil was used to add more wear around doors and bonnet. Finally I decided what items to put between the legs of the crane and the lorry was ready for action.