The family of Nystrup Gravel's late workshop manager Thorleif Petersen has on several occasions donated documents, photographs and small items with relevance for my study of the gravel company's 600 mm line. Back in 2014 Thorleif's graddaughter gave me a heap of papers and some photographs from a trip Thorleif made in the 1980's to Nystrup. Now I've had yet another donation from Thorleif's family.

While the old Agfa 600 Synchro Box isn't particularly collectable, it's funny to handle the camera used by Thorleif to take a lot of photographs around Nystrup. Most of them still unpublished. The maps however is a tresure trove of info. Apparently Thorleif marked his visits to locations where he searched for spare parts and equipment for Nystrup Gravel. Some of the locations are well known as other documents have previously shown Thorleif to have visited and in some cases bought equipment. It is however a huge surprise to see the sugar beet railways clearly marked out on the maps and a note made in the margin: "One English loco 150 hp Sakskøbing". It's not known what the note means and so far I have failed to find evidence for a loco made in Britain with 150 hp effect at the sugar beet railways at all. A matter I will be looking into during 2021! 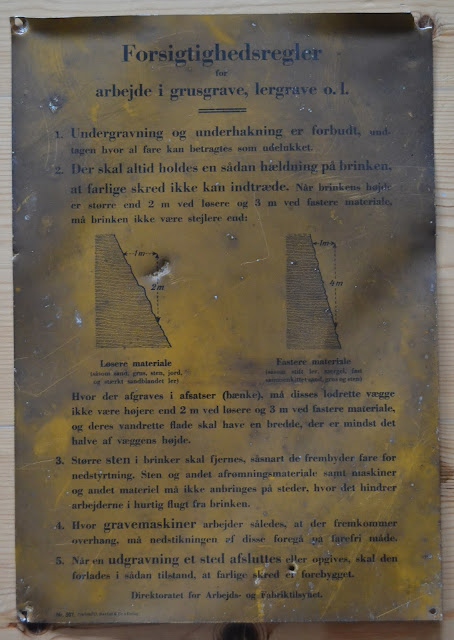 The sheet metal sign (a bit larger than A4-format) is an early health and safety measure giving a short notice on the rules of maximum gradients when excavating gravel. Current rules when excavating are quite different in Denmark today, allowing only gradients of 1 to 1 in contrast to the 2 or 4 to one mentioned on the sign.

Previous donations have included a wooden box from an anonymously reader of the blog.