After painting and weathering, the new resin wheels were fitted on the rebuilt axles. Not entirely without problems, but rebuilding old, half-built kits is never easy. The frames and underside of the lorry were weathered before I fitted the wheels.

I sprayed gloss varnish where the decals had to go. Costum made decals were fitted and covered with a spray of matt varnish. Danish license plates were mounted fore and aft and the deployed right turning indicator painted white with a red dot. All decals were from the small company 'Skilteskoven' ('A forest of signs'). In designing the license plates the Danish website www.nrpl.dk was a great help. It contains detailed information on the different legal and design features of Danish license plates from 1903 to the present times. The site is in Danish and as not many abroad models Danish vehicles it probably doesn't matter...
Apart from the floor of the cargo bay, the upper parts of the lorry received only a very light weathering. Weathing was done with oil paints to make the paint appear as faded. Some 'pin washes' around doors and windows were also added. Finally the weathering was sealed with a coat of satin varnish. 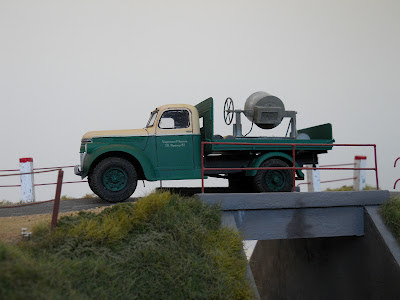 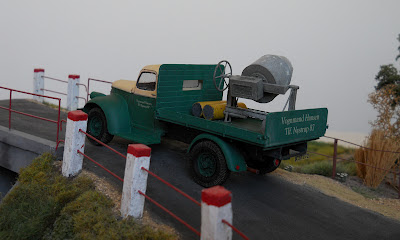 Next on the worktable is another braked skip and the ICM Ford V3000S that will be built as a lorry from the company 'Bankes Bakelit' as a tribute to a late member of the Danish Industrial Railway Society.
Posted by Claus Nielsen at Friday, May 25, 2012